The steering committee came up against various obstacles.  As any community led project knows there are always life events that result in people having to withdraw from any project and the community garden has seen it’s fair share of changes in the short time it has been running.

In 2014 the committee lost 3 or 4 key members for various personal reasons.  It was down to a skeleton crew of 4, on a good day…there was a fear that the project may have to be abandoned.

The wonderful thing about a great project, such as the community garden, is that someone always pops up to to rescue it.  And in June 2014 a new Chairperson was appointed and a new wave of engagement followed.

Certain areas had become overgrown and neglect was evident everywhere.  Slowly but surely the garden would be brought back into use.

The first area to be brought back into use was the children’s area.  There was a lot of work to do, the tyres had become full of docks and dandelions, everywhere else was covered in plantain and daisies.  A lot of backbreaking work later and the area had a new lease of life with new plants planted in the tyres by our younger members. 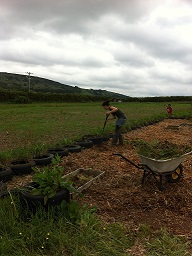 The polytunnel was an exciting little project.  This was undertaken in two parts. Unfortunately it was a bit of a dull, wet day the day the frame was erected.  After some head scratching the frame went up.  The committee saw another wave of change and it took several weeks before we were able to get a crew together to put on the cover.  The weather was a complete contrast to the first part of the job, it was a baking hot day, even at 4pm it remained blisteringly hot, we became concerned that no-one was actually going to show up to help.  Slowly our fears were laid to rest as people popped in and did their bit to help.  There was a real buzz in the air as everyone mucked in. 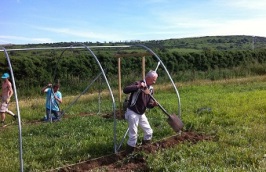 Our mission is to bring together members of the community to support and encourage gardening of all kinds, especially the growing of food. We are in a beautiful location on the edge of Dartmoor. We are located in Fatherford Lane, just off Exeter Road, you can find us on Google maps. View all posts by Okehampton Community Garden

This site uses Akismet to reduce spam. Learn how your comment data is processed.